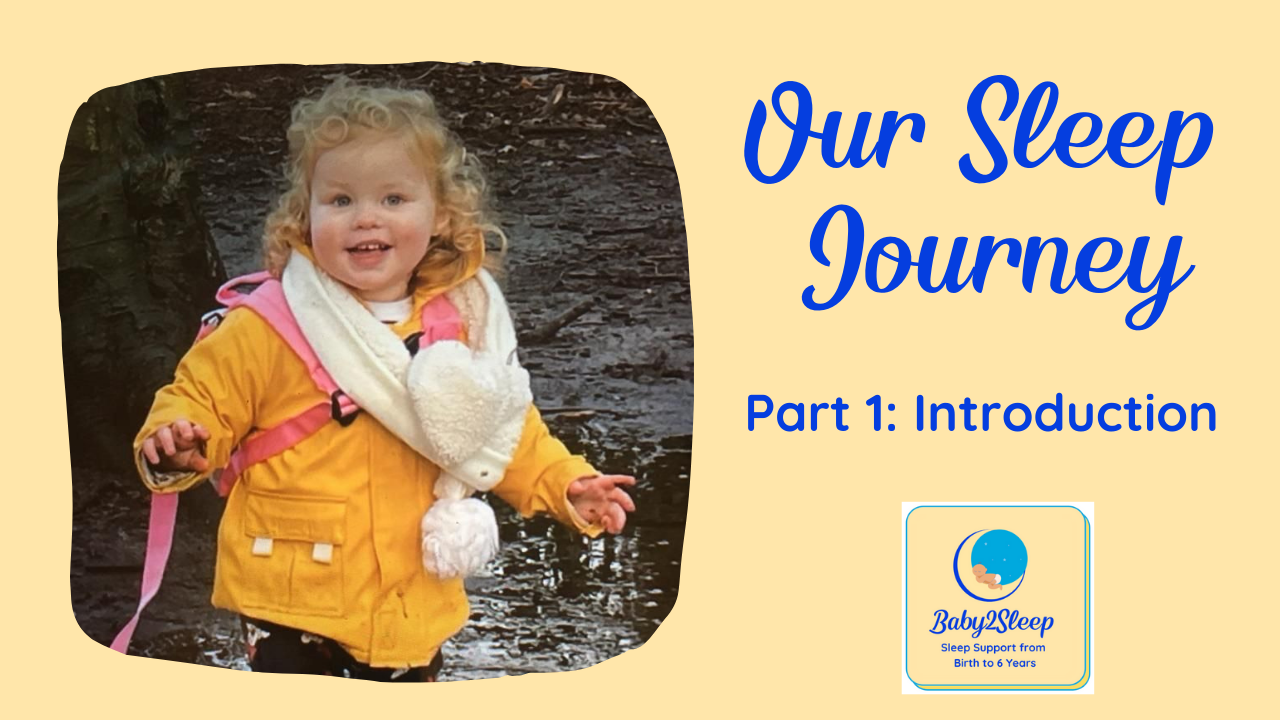 So here we are in 2022, the year when I need to practice what I preach and embark on my own sleep journey. I’m about to start an enormous transition with my 22-month-old daughter Alyssia.

In the next few weeks, I am hoping to make the following changes

It’s a lot to ask all at once, but I’m up for the challenge, and I’ve decided to document it all, to give you some ideas as to how I tackle things, and also to show you exactly what this transition can look like, what the challenges are, how long it can take, so that you have realistic expectations if you are trying something similar.

You can watch the video series on YouTube starting with this one. Please subscribe to the YouTube channel then you will get notifications when I add new videos. Or if you prefer to read an edited transcript of today’s video, then please keep reading.

Where are we starting from and why are we doing this now?

Alyssia currently sleeps in my room in her cot. She’s still breastfed, and she tends to wake in the night once, twice, sometimes five times. It’s completely up to her. All I’ve ever done is be responsive and I’ve left it down to her to work out when she’s going to stop breastfeeding.

One thing that I always say to parents is you don’t need to change anything unless it’s a problem.

If it’s a problem for you, then you probably need to change something. If it’s not a problem, then there’s nothing to change. So up to now, we haven’t had a problem with these sleeping arrangements, so we have left the situation to develop naturally.

However Alyssia has recently figured out how to climb out of her cot, and she thinks it’s funny. So that means she’s going to have to move into a bed very soon, which will have to be in her sister’s room as it won’t fit in our room. Her sister, who is six, is a light sleeper herself, and is at school, so she needs her sleep. So Alyssia will need to be sleeping through the night before she can sleep with her sister

My husband’s been sleeping upstairs in his office, on the floor on a kids mattress for two years, so it would be nice to have him come back into our room. And I would also love to be able to sleep through the night again

But the other side of this is that Sofia is a very sensitive sleeper –  she is the one that led to me becoming a sleep consultant in the first place. She’s nearly six she’s in school and we don’t want her sleep to be disturbed.

We have left things up to now,  hoping that it will all sort itself out. It hasn’t happened and now it’s time to do something.

So there’s multiple factors for our family as to why all these things need to happen as soon as possible.

With all these changes to be made in a short time, it’s a good idea to make a plan and get the changes in the right order – so this is the first draft of our plan

The first part is for me to stop breastfeeding. I’ve had a chat this morning with Charlotte from Milk Rebel. One of the things I always say to people is get support, and I will do the same even though I’m a sleep coach – it’s good to get reassurance from somebody else within the field as well.

So I’ve paid for Charlotte to give me some support this morning, and she’s confirmed that everything that I was going to do anyway is what she would have recommended. But what it does do is make me feel much more confident in being able to actually follow it all through. I won’t worry that I’m not responding to her, because I will be responding, but just not with the specific thing that she wants, which is a feed to help her settle herself back to sleep.

So we’ll start by changing that routine and taking that feed, and the others away. So my first step is going to be tomorrow when she’s home from nursery, I’m not going to be feeding her for her nap. I’m going to be talking to her all day about how she’s such a big girl now and she doesn’t need it anymore. It’s all gone because she’s such a big girl and I’ll be doing the bedtime feed only. I’ll be offering her the alternatives, which is a drink, a cuddle, a sit with her, whatever it might be.

I am expecting a kickback. There’s absolutely no doubt about this whatsoever. And that’s completely fine. That was one of the things that I felt much better about today speaking to an infant feeding specialist, because obviously there is all this thing about whether something is gentle, whether your baby shouldn’t cry. She’s nearly two and it’s not that she’s crying,  she’s having a kick off because she wants to go to sleep and we need to help her to start putting some boundaries into place.

So I am absolutely not worried about her being starving through the night.

I reckon within three, five, maybe seven days tops. we should have her sleeping through the night. This is a plan. Plans change. But let’s just see where we go from here.

While this is happening, we have ordered a Minnie Mouse bed and bedding for Alicia because she is absolutely obsessed with Minnie Mouse. We need to reorganise Sofia’s room slightly for the bed to fit in there, so I have ordered a Little Zoo teddy storage unit from Heartwood systems and we will be reorganising the other things in the room – you can see what we are up against on the video

It’s going to be a case of getting the new bed set up, letting her come in and just play –  that’s it to begin with. She can come in, she can play, she can get in and out of her bed and get used to it. She can be getting excited about it all this, while she is learning to sleep properly in her cot.

When she’s happy playing in there, I’m going to work towards getting her to have a nap in the bed, and then all being well, as long as everything goes to plan, she can sleep there at night. By this point, she will already be sleeping through the night and she will be happy in that sleep space. She will like the environment and she will get used to sharing a room.

3 Being Realistic and Flexible

This is the plan, and I am not expecting it to be easy. I’m expecting lots of things to go wrong and that’s okay. At the end of the day, my husband is a musician he teaches the piano, and he says you get musicians that don’t teach their own children the piano because it’s hard to do something when you’re literally living in it anyway.

So I’m not expecting this to be completely easy, hence me going out and getting external help before I start, to make sure that my plan is sound and that I’m doing the right thing.

But do follow my journey too. I’ll let you know how things go. I’ll probably have some tough nights and that’s fine – I’m expecting it. I have a really strong, world, intelligent, bright child who is going to test me. And that’s fine. She’s not a robot. She’s got a need and she’s got a want. And I need to make sure the need is met, but not the want. She wants to go to sleep, but she doesn’t need the feed to get there.

Anyway, I’ll be starting tomorrow night. Well, starting with tomorrow’s nap and I will keep you updated on how it’s all going. The good, the bad, the ugly and the successes. It will be a success. I’ve absolutely no doubt about it, but I do know that this is going to be a rocky road, and it would be for anybody in this position. So expect stressed-out me to come and do a video one day, and that’s fine.

Wish me luck, and I’ll keep you updated.