Home  >  Uncategorized   >  Mum guilt and judgement: how to lighten your load a little 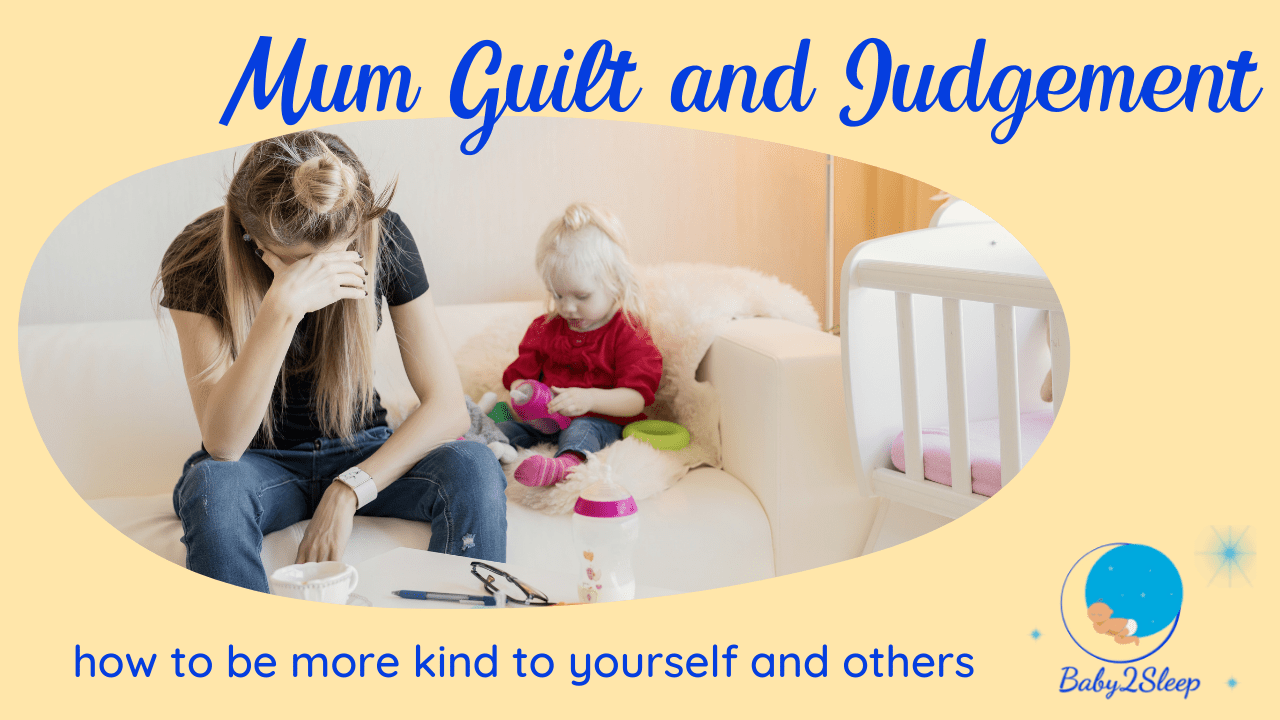 Mum guilt and judgement: how to lighten your load a little

In today’s video, I’m talking about mum guilt, something that we suffer with so badly.

Parenting is hard, regardless whether you’re mum or dad, It’s utterly amazing and it’s incredible, but nobody prepares you for that feeling that nothing you do is quite right. You always feel like you’re letting your child down. It doesn’t matter how amazing you are – you will always have that feeling and you’re not on your own in this, by the way, we all did. We all feel like we’re just not good enough – but you know what we really are all good enough.

There’s something that comes alongside this mum guilt feeling that just makes it so much harder – and that’s when we feel like we’re being judged and that judgement can come from anywhere. It starts right from the beginning, whether you’ve decided pre-birth, that you’re having a natural birth or a Caesarean, or whether you’re going to do hypnobirthing or whether you’re going to have every single drug under the sun because you’re just wanting to get through it…

But for some bizarre reason, we live in this world where everybody feels that they need to judge everybody else’s opinion on something. Oh, no, I wouldn’t do it like that. Or you should have done this or you should have done that. And, you know, it sucks. It absolutely sucks because we’re all on this same journey. We’re not all trying to do something different, we’re all having a baby and we’re all raising a child. We are all on that same path so why can’t we actually all get together and hold each other’s hand and say, whatever you decide to do, I’ve got you, I’ll support you, I’ll help you.

It’s OK to ask for help

I’ve had people that I’ve worked with in the past, who have not told their friends that they’ve hired me to help them with their baby’s sleep, because they felt that they would be judged, because they couldn’t do it themselves and they feel like even though we’ve done it gently, because we had to do something to help that family, because they were suffering,  by actually intervening and not letting nature take its course and having some kind of help and intervention that they were going to be judged.

They choose to stay silent, rather than saying,

Why should we feel like we can’t tell our friends what we’ve done to get there? 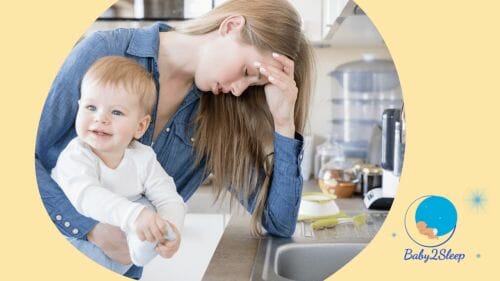 We should be able to choose what we want our children to wear, how we want to feed them, how we want to help them to sleep, as long as we’re not doing anything dangerous. And this is the key.

Everything has to be informed. If you speak to a friend and you hear that they’re going to do something and you know that that is something that might be dangerous, for example they might be going to the shop to buy cot bumpers. That’s not a judgement thing that’s you actually raising an issue to your friend to say, “did you know that cot bumpers aren’t safe, that they are a SIDS risk?”

So then what you’re doing is you’re not judging you’re, just giving them information so they can then go away and make their own decision.

If you have a friend that chooses to formula feed, if you’re a breastfeeding person, you might decide to offer facts if your friends would like them. “Would you like some more information on breastfeeding? Is there something I can help you with?” You might find out that actually they’d like to breastfeed, but they’re nervous about how it might be in public. So they’re choosing to go down the other route because actually, in the UK, we are absolutely appalling with our breastfeeding rates. So it might just be that they’ve been given some bad information.

This also comes down to the sleep side of things. Yes, I’m not one for cry-it-out or controlled crying. That’s not my thing. However, what I am fully aware of is that for some babies,  who might be of a more chilled out nature that might not be massively overtired, might actually benefit from being left alone to cry for a while. It’s not something I personally would advise, but that might be something that parent has noticed in their own child because we are the best people to know our children.

For example, I knew my little girl was left-handed when she was a few months old. We are all right-handed. There was no reason for me to think she was a leftie and I kept getting told by the health visitors “Oh, no, it will be years before you find out.” No, she was left handed. So it’s that knowing what’s what, where you’re going with the sleep side of things.

So controlled crying can work for certain babies in certain families.  However, if somebody has been forced into controlled crying that’s a different type of thing, because they might just not know that there are other avenues to explore. Everything is about informed decisions, making sure we make the right decisions for our children based on the knowledge that we have. 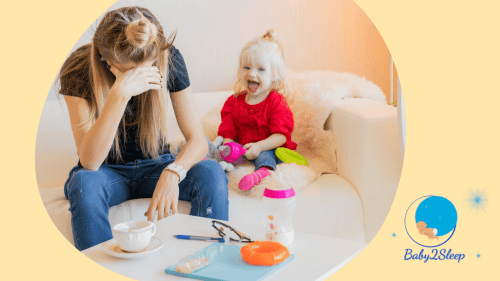 I’m going to say this now, if you’ve done something and you didn’t have the knowledge and you regret it now, well, do you know what? It’s the past. It can’t be changed. Our backpacks carry enough mum guilt with them. You can’t change history. All you can do is learn from it and move forward. That is it.

We can’t carry any more guilt around? Move it away, get it out the way. And just say “I did the best that I could with the knowledge that I had.”

But then you might have the other people whose baby is waking six, seven, eight times per night and Mum’s on her knees or Dad’s on his knees. And everyone’s got to work and try and they’ve got to try and do something. And baby’s crying in the night and baby’s not happy, Mum and Dad aren’t happy , they’re arguing.  There might be brothers and sisters in the house that are getting woken up, and that’s when people come to me because they’re thinking, Well, what else can I do?

I know this is one of my favourite things to say but it’s true –  do what’s right for you. Do what’s right for your baby. Do your research, because in the middle, there is so much you can do to help and support your baby, to sleep well without having to go to one of the extremes. And you might need to do a lot or you might not need to do that much, but making some tweaks could be enough to make a big difference.

Look for the right support

Get some more information, get support. And one thing I will say for COVID, it has brought to light how much support there is out there. So whereas previously all we might have thought about was the fact that actually we just had our health visitor. So would nip over to the health visitor and we would ask them the questions. They can be great but they might not be.

I used to get told I was an anxious mum, which luckily I wasn’t an anxious mum – I was just a mum that wanted to get things right and personally,  I don’t think there’s anything wrong with that. I wanted to be the best mum I could be. So I wanted to have information so I could make informed decisions to help my child develop well. But because I used to ask questions, I was then labelled as an anxious mum, So  that judgement of me being an anxious mum – that’s stuck with me and that’s probably on a record somewhere that I’m an anxious person, which I’m really not.  I’ve been judged on this by somebody who doesn’t really know me, who doesn’t understand what I’m doing and it’s probably on a record.

So what we have now is because the Internet has just blown up with people out there doing things to help others, whether it’s prenatal, postnatal and birth doulas IBCLCs, your feeding specialist, people that deal with allergies your sleep people,  birth trauma, all these amazing things. Everything has come together now and we can actually see that there is a huge, huge support network out there.

We’ve just got to look for it.

And sometimes it might be worth investing a little bit of money and speaking to one of these specialists to actually get us through a better journey. For example, if you’re breastfeeding and you’re struggling,  it might actually be better for you financially to fork out and speak to an IBCLC and get the help for breastfeeding,  than it would be to stop breastfeeding and move to formula and pay ten pounds a week for formula. So there are little things like that, so it can be with sleep stuff as well.

The amount of people I speak to who spent a fortune on sleep aids –  I’ve got white noise machine I’ve got Ewan the sheep,  I’ve got that or the other things. And you know what? Nothing’s worked well.

No, because actually, that kit is not what’s going to get your baby to sleep well. You will do better by helping them and giving them a good routine and supporting them to sleep when they’re ready to sleep. 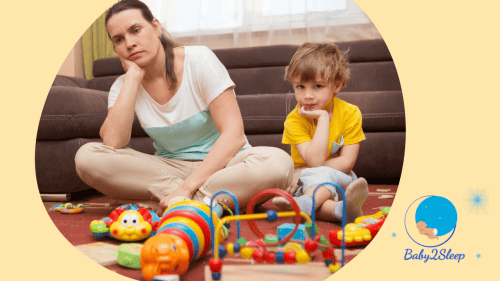 We will never, ever feel like we are good enough for our children. I am telling you now you are, your children will absolutely love you and absolutely adore you for your entire life. You are their world and you are doing absolutely everything you possibly can to give them their best life. Forget the mum guilt. There’s enough stuff going on in our world at the moment.  All we can do is move forward, do our research, make firm decisions and go from there.