Home  >  Uncategorized   >  Are my baby’s sleep disturbance due to teething? 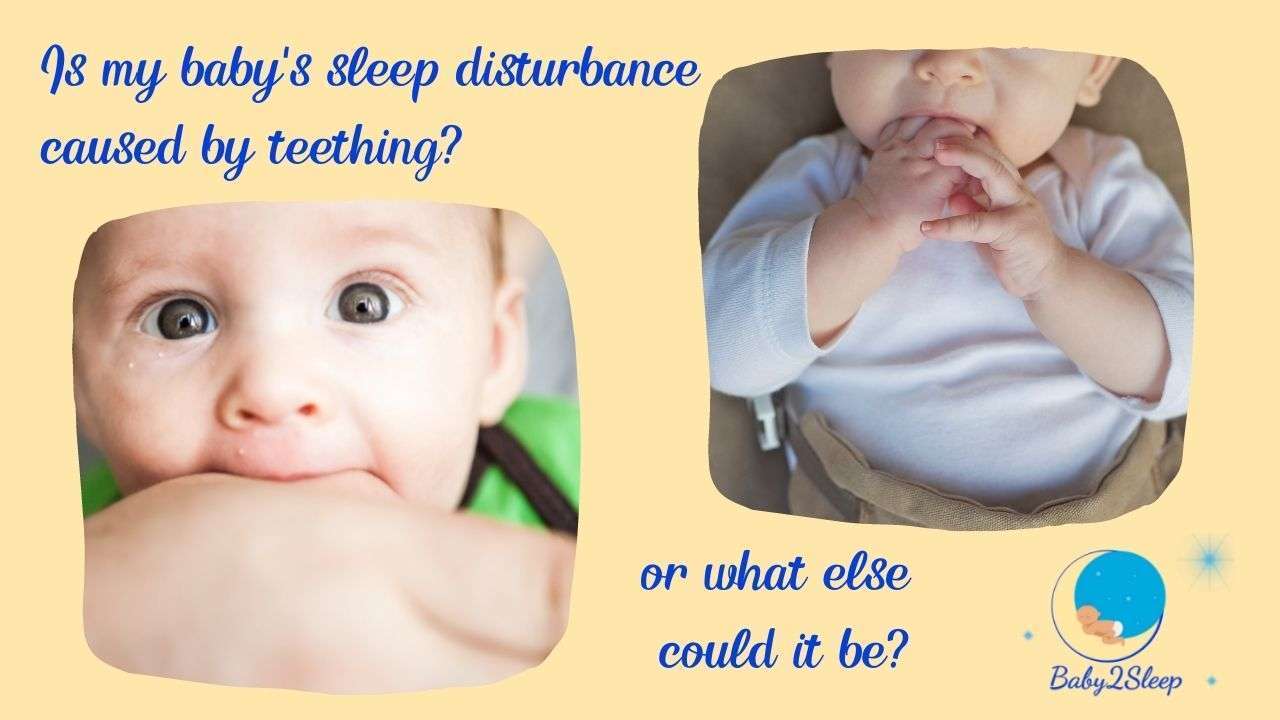 Are my baby’s sleep disturbance due to teething?

Today’s video is about Teething and Sleep.

So many sleep problems are blamed on teething but is that really always the case or could it be something else? So if like me, you’ve got a little one that’s never really slept great, especially if it’s your first, you might blame everything there is sleep-related on teeth.

I know I did for the first eight and a half months of her life. I could have sworn she was teething.  She wasn’t. I just didn’t know any better.

That’s totally normal because sleep is complex and it’s easy to blame everything on teething – even health professionals may tell you that this is the case.  So you’re not wrong for thinking it’s teething, but chances are it’s not.

Teething is simply a tooth coming through the gum, and the gum is just wearing down, making space for the tooth to come through.

But what do we say? We say the tooth is “cutting through” or “breaking through” the gum. And with terms like these we think  “Oh, that’s painful. That’s got to be so painful.” But simply put, it’s just the gum is wearing down and the tooth is coming through. And the way that the gum will wear down is from the baby chomping on things, for example chewing on the table, biting on the cot, the xylophone stick or something like that. they might be chomping on their fingers too. These are things that are actually going to help that gum break down, but this can sometimes cause a little bit of inflammation, and may also cause a little bit of a temperature.

The reason I’m saying this is it’s important to know when you need to ask your GP for help. If you regularly blame a temperature on teething, you could miss something because teething itself usually affects sleep for a maximum of six days and nights. So if something has been going on for longer than that, or if there is a temperature of 38 or higher, then I would be saying you need to speak to your GP.

So what are the other myths around teething?

There’s nothing teething-related about that, t’s just normal play.

What about the multiple and/or loose nappies? think about when babies start putting things in their mouth. Think about when they start rolling as well, maybe at four or five months. then they’re putting their fingers in the dog’s mouth and they’re grabbing anything that’s on the floor and they put their hands, in their mouth constantly after they’ve touched all these germs. That is much more likely to be the cause of some dodgy nappies that are going through.

So for many of these teething myths, if you start thinking about why these things are happening, it is much more likely down to normal baby stuff than to do with the tooth coming through.

Quite often the first few teeth come through with no bother whatsoever, the baby doesn’t even notice them. Every baby’s different. Some won’t notice hardly any teeth. Some will scream for every single tooth. But, if you think about it from another side of things, if you’ve got a baby that’s not sleeping well anyway, their cortisol levels will be higher. And if their cortisol levels are higher, their pain threshold is lower. So they are going to feel a tooth more if that’s what it is.

But if you’ve got a baby that tends to be sleeping well, then the pain threshold is probably a bit higher, so they’re much more tolerant of the toothache as well. So it’s a bit of a catch 22. But if you can take teething away as the reason for poor sleep, then you can start working on what’s actually going on around it instead.

When does the first tooth start to come through? Normally around six months.- when they start eating solids. So actually, is it a tooth that’s coming through that’s causing all these different symptoms or is it the fact they’ve just eaten something and it has disagreed with them. The body is having to get used to doing something completely different, again, totally and utterly normal and not necessarily a teething thing.

What is teething then?

So what is it then?  How can you recognise that’s probably a tooth that’s coming through?. What are the signs?

So it could be that their finger is in their mouth and they are chomping hard on that finger. They are putting really hard things in their mouth. Their cheeks could also be bright red. Those are probably the biggest clues.

The other thing to consider is, your baby might be absolutely fine during the day and it only happens at night. Does that mean teething or not? It depends…  Think about it, if you hurt your knee or something like that, it might bother you a bit during the day, but you just crack on as normal and you’re busy and you’re doing things and life goes on. And then you go to bed and you’re bored – you haven’t got the distraction and the things going on around you, and suddenly you realise it is a bit sore.

Baby’s perspective. They’ve been up all day and they are easily distracted. The thought is taken away from what’s going on in their mouth. Then they go to bed and it’s dark and it’s quiet and they’re lying there ready to go to sleep, and the blood is going to their head so the pressure is increasing. Therefore, the pain is possibly a little bit more.  And they lie there and may start to notice the pain and to fret about it.

So yes, teething can affect sleep, but it is usually a short term thing and you tend to find the worst night is when it’s actually cutting through. So you wake up one morning after a really rough night and you’ll go, oh, there’s a tooth. And, you know, sometimes it can be a surprise if you have a really bad night. You had absolutely no clue it was coming. And suddenly you have a bad night and there’s a tooth.

Sometimes it might take a few days, but I wouldn’t be pushing it much past six if you were in a situation like something’s going on for longer, then I would say it might be a medical thing If you’re not sure, if the tummy is not good, if they’ve got a temperature, especially if it’s over 38 and you know, then I would definitely be seeking medical advice.

What can you do to help teething?

We’ve talked about what it actually is, but what are the things that you can do?

While a tooth is actually coming through, you can wash face towels and things like that, pop them into a freezer bag or something and put them in the freezer. Always make sure if you’re going to do things like this that you defrost them slightly first.  Anything really, which is cold (but not too frozen so they stick), let them chomp down on it, give them things that they can actually chomp down on that are safe as well because they will literally just grab whatever they can get hold of to put things in the range that are easy for them to get.

People talk about things like amber necklaces. There’s nothing proven with them and you are going down the route of the risk of strangulation and things like that as well. You could get a necklace that you can wear that they can chew on. But that’s on you. And you should look out for bigger beads and things like that, like the breastfeeding necklaces to distract them.

These are all things that can help from a homeopathic side, holding your baby upright.  If they are teething, if they are in quite a bit of pain with it, this will bring the blood pressure n the head down a bit. And if you think that they are really struggling, there’s no harm in giving Calpol. What you don’t want to do is overmedicate regularly because you constantly think it’s it’s teething. So these are the bits that are really important.

But you can step that up. You’ve obviously got things like Ubon jellies as well. So there’s lots of little things you can do, lots of nice teething toys, pop them in the fridge, just make sure they’re clean.

If you’re not sure if there’s a temperature obviously seek medical advice, if it’s been going on for more than six days, absolutely seek medical advice. If it’s something that’s continuous, the chances are it’s not teething. So let’s look at what it actually is. And so let’s sort the sleep out. And that might actually even help with that teething as well if we can bring those cortisol levels down.

Feel free to join the Baby2Sleep Village Facebook group and check out the support options on our website if you are struggling. I’d be happy to help you discover for yourself if your issues are due to teething or not