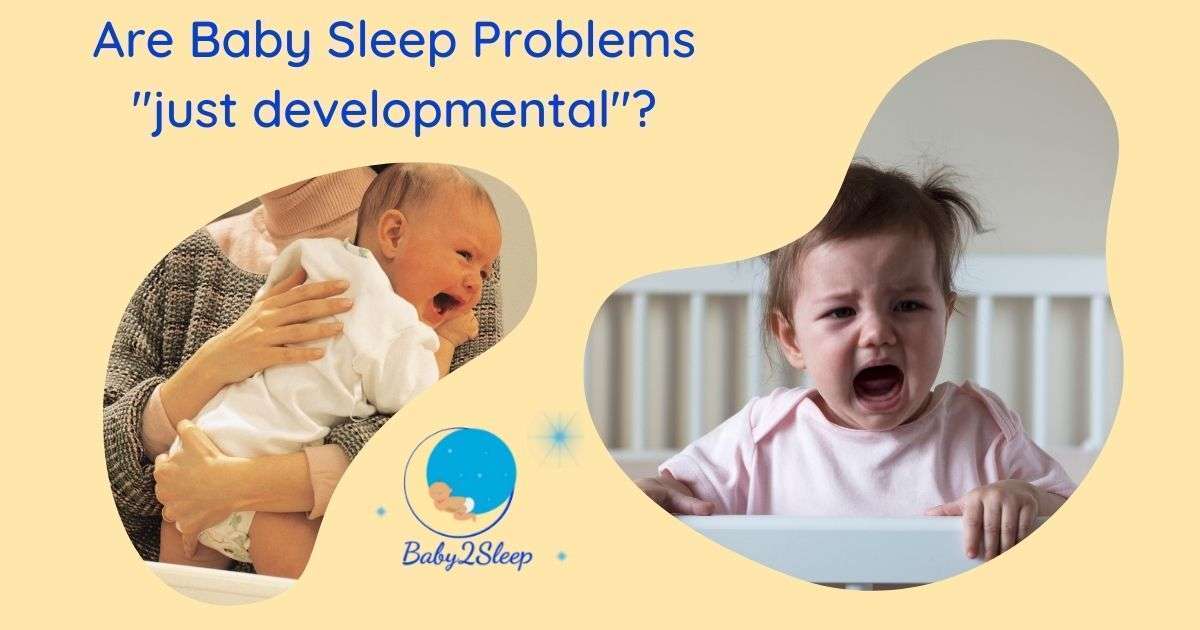 Baby Sleep; Is it purely developmental or can Parental support help?

In today’s video, I’m going to answer the question for you as to whether or not baby sleep is purely developmental. If, as I did, you have a baby that thinks sleep is something that only other babies do, you’ve probably heard tons of advice from everybody, and much of it will be contradictory. Take a look at today’s video and I will clear up some of the confusion for you.

On the one hand you’ll have people saying you’ve got to sleep train your baby. You’ve got to teach them to be able to fall asleep without you. You’ve got to let them self-soothe. They will have to just figure it out, otherwise, you’re going to have a rod for your own back

Then you’ll have had the other side saying,  “I know. It’s so hard, isn’t it? My little one wakes up a lot as well, but it’s purely developmental. It’ll all sort itself out. It’s just a phase. It’s normal. You can’t do anything because it will damage them.”

And you sit there in the middle, wondering what you’re supposed to do.

“You’re telling me it’s developmental, you’re telling me that my baby will just sleep when they want to sleep? My kid didn’t get that memo. She’s not going to sleep, OK? You’re telling me just to do sleep training and do controlled crying or just leave her to cry? But she can outcry everybody. What am I going to do?  I’m lost, I’m genuinely, genuinely lost. I don’t know what I’m supposed to do. Is it developmental? And she will just figure it out or do I really need to go down this route where I make myself feel physically sick, listening to my little one cry for hours and hours and hours while I’m out of the room crying as well?”

Does this sound familiar? Well, let me tell you – neither of these two extremes is totally right. Many sleep changes are indeed developmental, but we also have to play our role as parents, spotting those changes, reacting to them and teaching our child to cope with the transition. 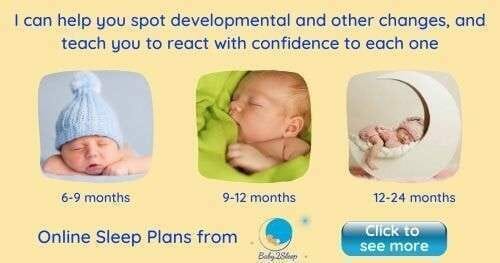 Let me tell you about my two girls…

My eldest daughter, Sofia, is now five. She is the reason I do what I do and got qualified in sleep training. She is the one that didn’t get the memo about sleep. She would be up for hours and hours and hours in the night. She would scream, she would cry! In the daytime, she was the happiest little girl going but when it came to sleep, it was just something that just didn’t happen. And it wasn’t “just a phase.” 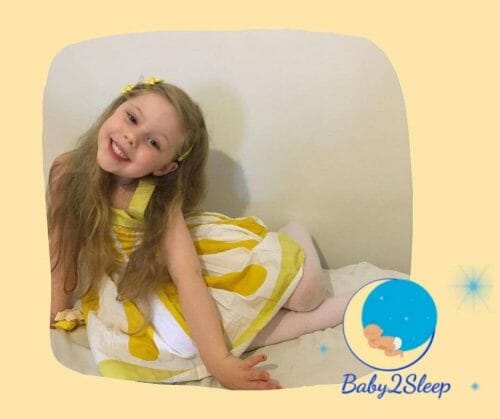 Her problems with sleep started right from the beginning and even now at five, I have to still be very much on top of things, and I’m still constantly watching, learning and adapting, because she just has general difficulties with sleep. She likes to get up early and she likes to test the boundaries and things like that.

However, my youngest daughter. Alyssia is 15 months now, and up to now, her sleep changes have been purely developmental. She doesn’t sleep through the night  – she’s 15 months. But I’ve done nothing to try and get her to sleep through the night because she’s a thumbsucker, whereas Sofia didn’t have anything like that. She had a dummy, but  Alyssia uses her thumb, so she finds her own way.to sleep

She never fell asleep on me. She’s never been fed to sleep. She’s always had her own thing. Every single time. 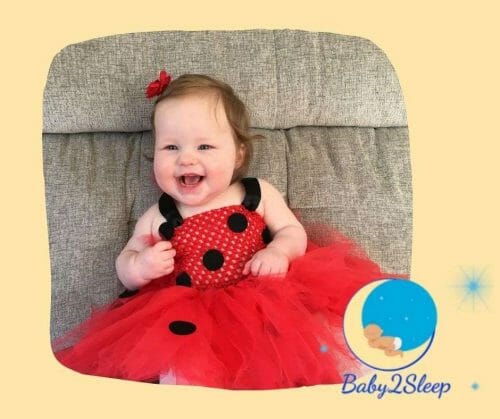 Yes, she has reached and transitioned through the typical sleep regressions, which are really a huge, big brain development. She’s gone through each one exactly as they would normally do it. So all the things that I’ve learnt about, she is bang on cue with them.

So when we came to four months and sleep took a step backwards and I’m going, “Wow, OK, this is really tough because I’ve got used to what I had, and now suddenly we’re going through a bad patch. But I know what I need to do to get through it. And I accept that this is a phase, this is developmental.” And we got through it.

Every single time we’ve gone through blips and changes, every single time there’s a tooth I’ve known it’s a tooth, and you could tell it was a tooth. If there’s been illness, all these things I’ve been able to see that something’s not right with the sleep, and I can figure out what to expect and I know what to do and so we have got through it. Sometimes a cold has struck, a tooth has cut through whatever it is, something has happened that has made that sleep go backwards or she’s decided that she’s going from sitting to standing to walking around to cruising, crawling. And when these big developments happen, sleep takes a back foot, but it’s been easy enough to get back on track with because I know what I’m doing because this little girl puts herself to sleep.

There has never been a big problem. She doesn’t need me. She doesn’t generally cry out for me. She will occasionally, of course, and I’ll go to her, obviously, because she cries out for me. But hers is absolutely developmental. I’ve not had to do anything in regards to even gentle sleep training because I haven’t needed to. She hasn’t needed that. So this is why I say you’ve got two different extremes. Her sleep is purely developmental.

Sofia’s sleep had a  developmental element to it, but if I had just left it going down the developmental route, it just wouldn’t have happened because it was not coming. Sleep wasn’t going to happen by itself. There had to be changes. It was my job as a parent to make sure that she was given the opportunities to sleep, because these are the bits here where it’s OK saying it’s developmental and she’ll sleep when she wants to sleep, but if I don’t give her the opportunity to go to sleep at the times when she’s ready to go to sleep, well, that’s not going to help anybody is that’s not a developmental thing. That’s me missing the boat. That’s for me as the parent not getting it right. So I can’t expect her sleep to get better if I’m not doing the right things.

So, yes, for most children there is an element of developmental changes in sleep patterns, but we’ve got to have all the bits together – there are things we can do to help them that do not involve letting them just get used to it and cry it out. For example, have the naps in a good place, have a good bedtime routine in place, have the nights in a good place in the sense of, we know what we’re going to do.

These are all things that really, really can help. And knowing what’s going to happen, when these developments kick in, knowing how teething actually affects sleep, that’s something I’m going to be doing at some point soon as well.

So to answer the dilemma, nobody’s right. Sleep changes are not purely developmental and you don’t just have to leave them to cry it out. You can anticipate the changes that are coming and you can work out things to do. Above all, you can find ways to help your child to learn to go to sleep so that they will be best placed to transition through the changes when they occur  There is an element where sleep changes are developmental, but as parents, we need to actually help and support them to find that way.

If you are struggling with this, or if you want some guidance as to the signs to look out for, the changes that might be coming and lots of practical things you can do to help, then please take a look at my online sleep plans, which are arranged according to the age of your baby or toddler. The plans are arranged in a series of short videos so they are easy for you to look at and learn from even if you are exhausted.

I hope that makes you feel a bit better about any of the choices that you have made or that you are contemplating making. This is really important because, at the end of the day, this is your baby. You can’t feel that you’re lost. You need to be able to say, I am the parent and I know how I can help you.