Home  >  Parenting   >  The 3 Nights in Hospital after Sofia’s birth 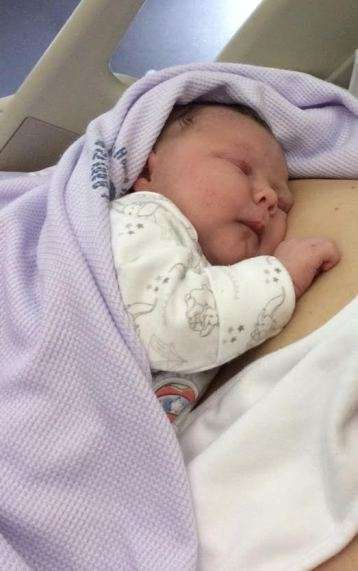 The 3 Nights in Hospital after Sofia’s birth

So, by now you have probably read that my birthing plan went out of the window and was good for nothing other than fueling a bonfire.

The stay in hospital after the birth was no better. I have never experienced anything so awful. Hang on, I tell a lie, staying on a Gastro ward where patients were drunk and accusing me and others of stealing their drugs, and hearing about patients having knives under their mattress was pretty terrifying, but that’s a story for another day.

I was placed onto a ward with other mums and their babies, which would have been fine, if the other patients were in any way respectful of the other mums on the ward. At 3am there was one mum chatting loudly on the phone, and she even had it on speaker so we could all hear the conversation. It wasn’t like anyone was getting much sleep anyway, but the additional disturbance felt unjustified. 23 hours of labour, no sleep, agony after an emergency C-section, a newborn baby with an infection, a breastfeeding struggle along with naturally raging hormones didn’t put me in a great place, and the support on the ward was non-existent.

I fully understand they are strained, overworked, underpaid, understaffed and stressed and I guess they become immune to the noises working on a maternity ward, but this experience felt extreme. I begged to pay for my own room as I really was not in a good place, but communication was poor, and the messages just weren’t getting passed on.

I was in so much pain after my section, and as with the labour, it felt as though they thought I was been overly dramatic. I lost count of the amount of times I heard the sentence, ‘oh, you are overdue your pain meds aren’t you?’ I was begging for them knowing full well when I was due, but I was made to feel I was moaning about nothing. This might not be as bad for the majority, but due to multiple inflammatory diseases I have, I can’t help but think the pain was higher than most and my CRP (inflammatory markers) passed the 600 mark. Normal CRP is 5 or less. I found out a few days after I got home that I did have an infection, I just wasn’t taken seriously on the ward.

Due the emergency section, I didn’t get the immediate skin to skin I would have liked, and it was a while before I got to hold my baby. I don’t really remember the first few hours at all. I will never know if this was partly the reason why breastfeeding was such a struggle, but I don’t think it will have helped matters. We really struggled with the latch and she was just not feeding, and the pain to keep on trying was horrific.

I ended up hand expressing and using a syringe to feed her to make sure she was getting what she needed. It was exhausting, but as I had been led to believe for so long that I wasn’t going to be able to breastfeed due my medication, and to only recently find out I could, I was determined not to fail.

While in hospital, I made my feelings on feeding very clear, so I got a shock when I saw a nurse pouring 30ml’s of formula into a cup to give to my day-old baby. She naturally thought she was helping as I was so exhausted, but it really felt like my choices were been taken away from me without my knowledge or consent.

I negotiated with her that if I couldn’t cope, she could give Sofia 10ml given the size of her tummy, as the most she had been taking that day was 3ml, so 30ml felt excessive. This just made me even more determined, and I managed to keep hand expressing and kept her on breastmilk, even though we could not establish a latch.

The feeding specialists came over to try and help me, but nothing seemed to work. I have since learnt that there is a big difference between the infant feeding team within the hospital and lactation specialists. Please don’t think this is me disrespecting the feeding teams, they do an incredible job, but it is unfortunate the funds aren’t there to give them proper training so they can support new mums better. They must find it frustrating themselves, but to do the IBCLC training would cost them a lot of money and take them a long time to complete, and to do this alongside their full time job would be so difficult.

On the Sunday night, we were able to go home. It had been an awful experience, but I had this amazing little baby girl to take home with me. Wow.

This was just the start of a very difficult breastfeeding journey which will be my next post. Luckily, I got the right help after 5 weeks and was able to breastfeed until she naturally weaned at 18 months. I know others aren’t so lucky and don’t find the right support, or their health gets in the way of been able to breastfeed. I am currently in a stalemate with my gastro consultant as to whether I can or can’t this time around, but I will update more on this as I find out more. I won’t be taken down easily though.

Planning For Next Time

I’m not going to lie, the experience has left me extremely nervous to go back to the same hospital for baby 2, unfortunately, due to my medical notes and Gastro consultant being at this hospital, I don’t really have a lot of choice. I know it’s a great hospital in general and they have got me through so much in the last 16 years, but it doesn’t get rid of the fear.

I was advised to write a letter to go in my notes detailing my last experience in the hope that I am looked after better this time. If you have had a bad experience before, I can’t recommend doing this enough. I don’t know if it will help. I don’t know how things will go this time at all. The future is unpredictable. However, I’m going on with my eyes wide open. Expecting the worst, so anything better than that can only be a bonus.

Interestingly enough, until this pregnancy, I think I had boxed the experience off in my head. I think this is totally normal as you have the thing you wanted at the end of it. Your amazing child. However, it has brought it all back to the surface. I have lost count how many times I have ended up in tears in the middle of an appointment reliving those days through fear of it been that way again.

I genuinely don’t think I realised how much it had affected me.

Fingers crossed it will be different when baby 2 arrives.