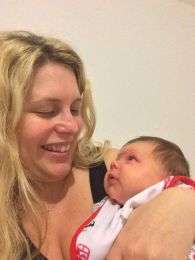 We arrived home on the Sunday evening, and we had our first visit from the Health Visitor on the Monday. This involved having her weighed, and to our surprise, she had lost nearly 10% of her birth weight and had dropped to 7lb 1oz. I was then advised to top her up with formula.

I must be honest and say that I am surprised how much of a push there is towards formula within the NHS rather than supporting breastfeeding. I have no issues either way as to what someone chooses to do, a decision on how to feed a baby should be down to the parents, however, accurate and supportive knowledge should be shared in my opinion, and should a mum choose to breastfeed, they should be given the support to help them achieve this. It really doesn’t come as naturally as we all like to think.

I had previously been told I would only be able to breastfeed for the first 2 weeks due to my medication, however, medical information had recently changed, and luckily I was well enough to not need the medication in a hurry.

Well, the type of personality I have is one that doesn’t like to be defeated, and I also don’t like been told I can’t do something. To find out that I was medically able to breastfeed gave me a determination I didn’t know I had to be able to conquer it, so to be given the advice to top up with formula just made me push back harder.

As the issue seemed to be with Sofia’s latch, the health visitor wasn’t confident that she would gain the weight she needed to, so I made the decision to express so we could see how much milk she was taking rather than guessing.

I had bought a cheap manual pump in advance of the birth as a ‘just in case’, however, this turned out to be a waste of money and I was spending all day attached to a pump with hardly any milk production. I then decided to go all out and get the Medala swing double breast pump and it made the world of difference. It arrived the next day and it really was a game changer. I was suddenly able to express 90ml’s in one go rather spending an hour trying to get 30ml. After 3 days of expressing, Sofia was weighed again and was back up to her birth weight, and I had managed to achieve this without the need to add formula.

Now it was time to start trying to get this latch right so we could really give breastfeeding a go. I did carry on expressing as well, as I was very aware that I didn’t want her weight to falter again and the latch was still awful. This may not have been helped due to the amount of pain I was in from the C-Section.

A few days later, the GP came to see me at home due to the excessive pain. I was completely bedridden. It turned out I had an infection, which if I’m honest didn’t come as a huge surprise. In 2012 I had an eye operation and was told that the chance of an infection was 1 in a million, well guess what, I really am 1 in a million. I ended up having the eye operated on again a year later as the infection had caused the operation to fail.

This infection needed to be treated, and the only antibiotics that would work were Metronidazole, to which I am no stranger to. Unfortunately, this is one of those medications where you really cannot breastfeed, so it was time for a week of pumping and dumping and turning to formula so I could get better. Sofia still needed to be fed.

Conscious of my milk supply still been so early on, I maintained a lot of skin to skin with Sofia to help boost the supply as I was determined that this was not the end of the journey.

First trip out of the house with Sofia

Sofia and formula didn’t make for a good relationship in that she was constantly sick. I’m not talking about a little bit, but excessive amounts. My mum came to stay to help for a few days as things were so difficult, and I remember shouting her one night, while holding Sofia in the position Mufasa does with Simba in the Lion King, when holding him over the cliff to show him off, while sick poured out of her mouth and nose. It was everywhere. It was not a fun week.

The week passed, my infection cleared up, the antibiotics were finished, we were 2 weeks into Sofia’s life, and it was time to try and get on the breastfeeding wagon…again. This did not prove easy. I was in agonising pain with my nipples, she was permanently attached to me, she didn’t sleep, she just fed and fed and fed. A lady from a breastfeeding support group came to see me to help me with my latch, she said it was fine, and so I continued.

Our First Trip Out Of The House

4 weeks after Sofia was born, I was finally able to leave the house, so I took Sofia to be weighed. This was a big moment as I hadn’t been able to walk much, so it was just a (very) slow walk with the pram to the clinic. It was so good to get out as I had literally been stuck in the house for 4 weeks.

A few days later, I went to stay with my mum in Blackpool, and all Sofia did was feed. My mum didn’t think it was normal but how were we to know any different. I was a formula fed baby so my mum had never experienced it and I was a first time mum, I just thought this must be what babies do as I had googled all about cluster feeding.

The Introduction Of The Dummy

My mum went to the chemist and came back with a dummy. Until this point, I was determined that a dummy would not be going into Sofia’s mouth. How desperate times change things. She did nothing but feed. We gave her the dummy and she settled a bit, enough to give me a little respite. So, the dummy stayed.

Finally, we got the latch

I then contacted the breastfeeding counsellor, Rosemary, from the NCT classes I had attended, and she said to visit her when I got back to Manchester. Sofia was 5 weeks by now and things had not really improved. I went to see Rosemary who spent an hour with me making sure we had it right. The latch was completely wrong, and I couldn’t seem get it right. She taught me how to get her to latch and it changed everything. Sofia suddenly started feeding properly and the pain for me went away.

I don’t know how long I could have persevered for if I hadn’t had that help at that moment. We had already faced enough challenges in Sofia’s short existence.

Luckily, I was able to continue the breastfeeding journey until she was 2 days shy of 18 months when the journey came to a natural end. It was strange, but it was like we both knew it was over at the exact same time.

I am so glad I persevered. Knowing there is a chance that my stubbornness to never fail may prevent some of the diseases I have, and possibly more, getting to her makes it worthwhile. I know there is no guarantee, but I know I did my best for both of us.

If I am honest, if it wasn’t for me having so many health issues, I don’t think I would have minded either way as to formula or breastfeeding, I just couldn’t stand the idea that she could have some of my issues and there was a chance, no matter how small, that I could do something to protect her.

Breastfeeding is hard, there is no doubt about it. Please know there is support out there if you need it. You don’t have to breastfeed, you just have to feed your baby…but…if you want to breastfeed and are having difficulties, please seek help. Look for your local IBCLC and they should be able to help. If you have already been on your journey and feel you gave up too early, don’t worry. You will have enough mum guilt throughout the rest of your life on other matters, this is just one to move past and say you did your best. I am hopeful that through social media, more awareness of different support functions will be more accessible and to use them will seem more normal. You really don’t have to face the challenges alone.