Home  >  Uncategorized   >  How to help your Child Sleep Well over Christmas

How to help your Child Sleep Well over Christmas

In today’s video, I’m looking at child sleep issues over the Christmas period. This is a time when routines can go out of the window and your small children are at risk of getting over-excited and overwhelmed which could make it harder for them to settle at bedtime.

For me, Christmas is the most magical time of the year. I loved it as a child and I love it even more as a parent

That incredible feeling that you get when you see your child’s face, when the elf moves, or when the new letter arrives from the North Pole, or you put the decorations on the tree. Anything to do with Christmas, your children’s faces just light up. And for me, there’s absolutely nothing more magical than making your children’s Christmas special.

I also know that from personal experience, how it can actually go not so great in the sense that if you’re not prepared, if you’re not expecting a particular reaction from your child, how it can actually ruin your Christmas day very quickly. I remember with Sofia when she was three, everything seemed absolutely fantastic. She seemed like she was coping really well. Everything seemed amazing. The grandparents had been round and then they left at 5 o’clock, and before we knew it, within two minutes of them leaving, she was sitting on the chair in the kitchen going, “This is the worst Christmas ever”.

Me and my husband were going, “Wow, what just happened?”  She didn’t have any tea or anything. I just thought, she’s tired. So I put her to bed and that was it till morning. She was just absolutely shattered because the day had been so exciting and the overwhelm had just become far too much for her.

So what can we do as parents to really support our children and make sure they get the best Christmas possible and that it isn’t so stressful for us as parents, and we’re not getting the same sort of shock that we got when they’re just so tired.

On Christmas Eve, we don’t want to be in the house all day. The chances are that you won’t be able to get out much on Christmas Day, so make sure that on Christmas Eve, you get them out, get them some fresh air and plenty of exercise, and have loads and loads of fun with them.

After that, it’s a good idea to start your evening routine earlier. It’s so easy to suddenly realise that they’re running to bed late by accident, because you planned too many things.

If you’re home by about four, you might decide to have tea a little bit earlier, and then you can say, “We’ve got Christmas Eve boxes”. Make some new traditions. Christmas Eve boxes are fantastic, and you can get refill packs for them every year as well.  You can put crafty things in there for a wind-down session, or you could put in little presents like pyjamas for Christmas Eve. The great thing about putting new pyjamas in there for them to unwrap is they’re getting a present, which is fun, but then they’re also excited to be getting ready for bed in their brand new Christmas pyjamas.

You could also sit down and watch television together as long as it’s not too close to bedtime – have a  sit down together, a bit of a wind down from what might have been a bit of a crazy day. But let’s still make sure we’re getting rid of any screens at least an hour before bedtime. 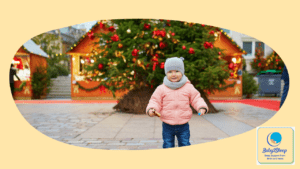 What you can always do in that hour is you can set up for Father Christmas to come so you could put out the cookies, the milk, whatever it might be. In my mum’s case, it was always put out Coke. And when we went to bed rather than the glass of Coke going to waste, she used to put her Bacardi in it. So no waste in our house, the carrot got taken away and used for Christmas dinner the next day. You can also set the stockings out and make it all really nice.

Here’s one of the little traditions that we had growing up, which I think is beautiful, and it’s one that I’ve carried on. It works really well when it comes to getting children to go to bed and it’s just a nice little family tradition. There are bells everywhere at Christmas – bells come in very toy kit going. So we’d be downstairs and one of the parents had always disappeared. And you’d hear the bells, you’d just hear the bells jingling and you’d just get my mum going. “What was that? Did you hear it? Did you hear Father Christmas? It’s the bells. He’s coming. He’s coming.”

The excitement comes from that. It’s like, okay, I think we need to get everybody ready for bed. Come on, quick. He’s on his way. Come on, let’s go. There were four of us so it was a bit more of a manic house, but you get the gist and that excitement because obviously, Father Christmas only comes while they’re asleep. So they’ve got to get to sleep. Otherwise, Father Christmas can’t come but the bells were a signal that he really is here. He really is on his way. It’s utterly magical.

On Christmas morning, they walk in the room and chances are, there are just silly amounts of presents. The thing is, we want to make sure that we don’t overwhelm them because it can be like, wow, I want to unwrap everything, but actually, I’m not paying attention to anything, or where do I even start with everything? So what we can do as parents is take it in turns, maybe to open some, move some out of the way. So you’re not doing all of them in one go.

So what we can do is say “Right. What we’ll do is we’ll open a few of these presents, we’ll see what we’ve got. Then we’ll go and have some breakfast”   because otherwise they just open them all. They have no idea what they’ve actually got, they don’t know what to play with and they just get kind of put to one side. And before you know it, it’s six months later. You’re going, “oh, I didn’t know you had that!” I’ve done it.

So just take it in stages and it just spreads the day out as well. It makes it more enjoyable. It’s not so rushed. And you’ll just feel the pressure released that little bit more. And then at least this way, they could be playing with some of the toys while you’re getting your dinner ready rather than you as a parent missing out on them opening the presents because you’re cooking. 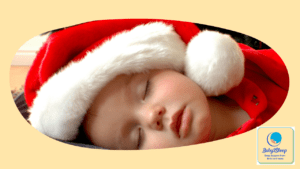 If you have a little one, that naps, keep it. If you’re going to let them have sweets and sugar, let it have it first thing. That sounds like a bad thing to say. Who gives the kids chocolate for breakfast? But actually, Christmas Day doesn’t really matter. Get it out of the system early. So they’ve got time to actually burn that sugar off for the rest of the day, it’s not the end of the world. But keep that nap. They might seem like they can keep going and keep going, give them the opportunity to wind them down, maybe take them off for a bit of quiet time or something like that before you start trying to put them down for a nap.

If you take them straight from playing with all these wonderful new toys, and now they’ve got to go for a nap, the chances are very high that you’re going to get some kind of pushback and you’re going to get a fight. So take them off somewhere, give them some space to wind down and then take them down for that nap as well.

Try to have teatime at the normal time, if possible, even if it’s just a small one, and keep your bedtime routine intact. You might decide to give them a nice bath or something like that to wind them down. If you’ve got an older child, you might be like a bath bomb or something, or a little bit of bubble bath with the younger ones. Just something to calm them, because chances are they will absolutely crash to sleep because they’ll be absolutely exhausted.

But if we can get them in a place where they’re not crashing because they are just so wired,  if we can help relax them and wind them down before bed, the chances are higher that they will sleep better.

I hope these tips are helpful and that you have a lovely Christmas with your family.